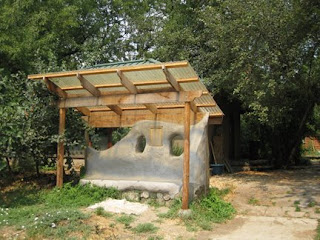 So before I get too far removed from Eugene, I thought it's be good to show some pics of the cob bench I worked on at Maitreya EcoVillage with Jack Stephens.

Local school children used to gather at this driveway waiting for the school bus, rain or shine. Now they've got a nice covered spot to wait and inspiring form to sit on. Maitreya also wanted a place that they could post announcements for events going on in the strawbale community building. There was an old fence at this location and the original fence posts were integrated into the structure. If ever needed, the original gate could still be reattached.

First we built an urbanite foundation (reclaimed roken chunks of concrete usually found in urban places...). Then we were able to start the cob process, we started mixing clay, sand and straw on tarps and then formed small lumps of the misture (called cobs) and began stacking them up in the form we felt best suit the space. As it grew we also learned how to cantilever and form arches with the material. The finish was done with an earthen plaster and then lime/casein paint with iron oxide pigments.

The earthen bench was completed over the course of 4 workshops and involved probably over 50 people. After attending the first workshop, I work-traded for the rest in exchange for building the roof structure. All the roof framing was made from reclaimed materials and constructed on sight, thanks to Rob Bolman.

I particularly like the back side of the bench wall with this adorable little face sculpted into it. It makes me giggle ever time I see it. :) 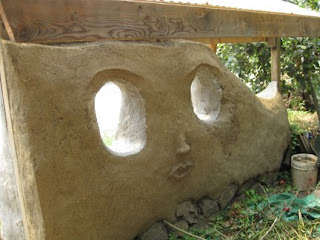