This year’s natural building colloquium was loads of fun! There was a great turn out of the full spectrum of builders from novice to very experienced and many who were leaders in activism and policy reform.

The site for this year's colloquium was Orella Ranch, a spectacular hilltop dropping off steeply into the Pacific Coast just north of Santa Barbara. Normally rented as a place for weddings, the facilities included one cob structure, a stage made from old wine barrels, a stone bar with concrete counter serving area, great camping and a prized lawn which we found many uses for. Just before the event we also built several bamboo structures to facilitate our presentation areas, bamboo showers, and several portable orchard toilets. ‘Sky Island’ as it became known, was an amazing place for our gathering of natural builders. 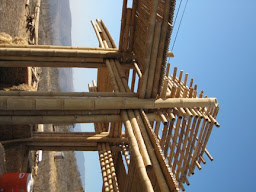 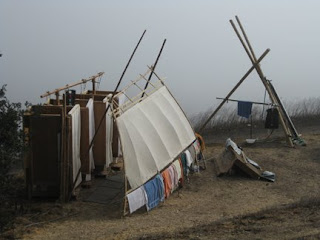 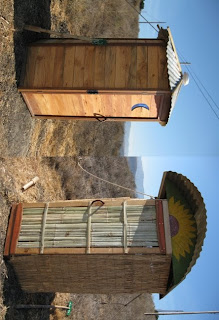 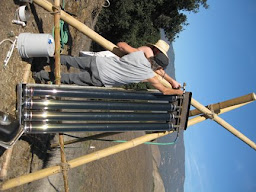 The hosts were also avid natural builders and environmentally concerned folks. And the thing that bothered them most about their business was that they always had to rent chemical port-a-potties for the weddings they would host. Naturally, with 70+ natural builders, we were able to conceive of a beautiful and functional way to deal with this problem. A Timberframe with six stalls was built by the owner and a ‘Watson Wick’ was built by Tom Watson himself to deal with 500 flushes per day. Then we were ready to have some fun, since each stall wall provided an opportunity to test a different wall system! These included various types of wattle and daub, light clay-straw, cob-mesh and more. The exterior walls were built using woven split bamboo and then plastering either side of the framework. In front of the structure we built a beautiful Manzanita privacy screen and hand washing area. I particularly enjoyed the end walls, because I got to try doing stained glass in a cob wall with out using lead—a technique I’ve been wanting to try for a while. I used cob rolled into tiny sausages to set each piece of glass and then pressed the mud around the edges of each piece. They turned out really good and I can only imagine where my new found art form will grow from here. 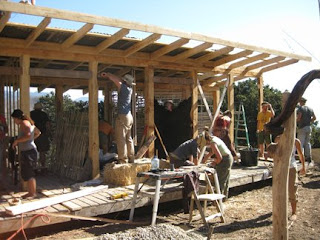 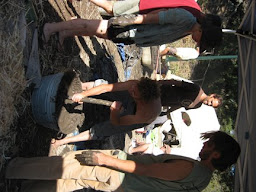 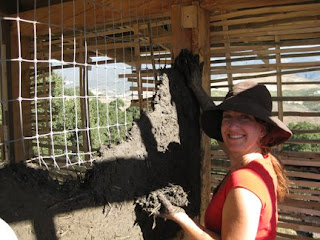 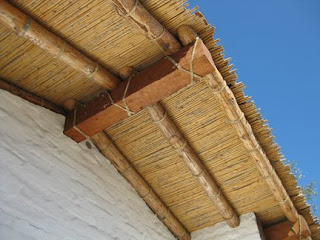 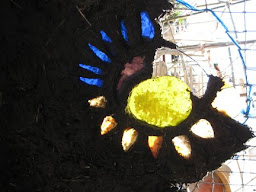 The most significant aspect of week however was not the building project, but the relationships and networking between the builders. I really started to feel my place in the community and how much each of our presences are needed in the movement. The support system that developed from this week alone is sure to carry me into the future and the projects of 2009 now feel totally do-able. Thank you all—you know who you are. 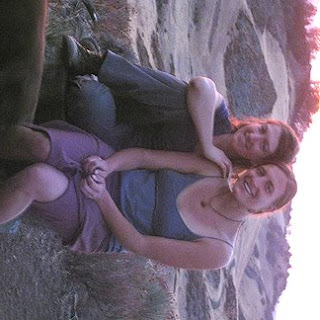